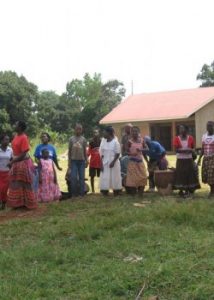 It has been a long time since we reported on the progress of our outreach to girls and women in Hoima Diocese, Uganda. We are most grateful to you all for the support we continue to receive. We hope and pray that God continues to bless and reward you all.

What and how they are doing now?

Most of the above named girls still need a lot support. We would also like to increase the number of girls under sponsorship. With your help we can do it.

For more information on the above girls or on how you can get involved, please contact us.

I conducted a survey with an aim of measuring the success and sustainability of the Busesa Orphans Piglet Project. This was based on the feedback from the beneficiaries on aspects of the original state of livelihood, benefits, and challenges encountered, family effort to sustain project as well as their recommendations on the way forward.

I had a chance of visiting and interviewing 5 children when I went to Buseesa on 12th February 2012.

It is a good project but requires continued sensitization and monitoring for sustainability to be achieved.

A week prior to my visit, an announcement was made in church requesting all beneficiaries of the project to gather at church the following Sunday for an interactive session with a representative from the sponsors. Five Children turned up for the session and this report has been largely based on their opinion. It has also been supplemented by ideas sourced from the interactive discussion with Fr. Godfrey Kisembo and my observations while on site.

Angella Nakagimu from Kitoro village had received two piglets – a male and a female.

She informed us that the male piglet died two days after she took it. The female was sold after it had a miscarriage of 8 piglets. The money was used to pay for her school fees and for her treatment when she fell sick. Her guardian purchased another piglet which is still being looked after with the purpose of targeting future revenue to sustain her and the siblings in school.

She was thankful for the piglet which enabled her to go to school; she also thanked the donors for the books, pens, etc. which were sent to them. In her message to the donors, she requested for additional support in areas of clothing and fees which are still a problem especially now that she has gone to secondary school.

In her recommendations, the Buseesa orphans piglet project should be expanded to other orphans for the betterment of the region.

Namalembeko Sylivia from Kitoro village also had received two piglets – a male and a female. The male was sold off and the money was used to cater for school fees. The female has consecutively delivered piglets which were sold and the money too used for fees.

They want to sell the pig because it can’t produce any more. They will buy a replacement to ensure continuity.

Katambula Micheal from Kitoma village had received a female piglet.

The pig had two miscarriages before they decided to sell it. Other piglets where bought and shared amongst him and other orphans. Some money was used to pay for school fees and purchase of uniform and books. Father Godfrey told them that the miscarriages were because the pig was not treated or looked after well while pregnant. He therefore advised that special attention be taken when the pigs are pregnant.

Nanyombi Scovia from Busesa said that she had received two piglets which died from swine fever. She asked for more piglets.

Sempiira John from Kiryabinyonyi had received two piglets which died from diarrhea.

These two families had no profit. They asked the donors for another chance.

I visited another orphan from Kitoma where I found one expecting female pig and five piglets. They had sold the male pig and three piglets and the money was used to buy books, pens, clothes and to meet school fees requirements.

Challenges met were that the animal feeds and medicine were expensive and scarce. He however recommended the project to others.

Recommendations from the children

Challenges encountered during the survey

I later visited the piggery at the parish where I found more than five pigs and around 20 piglets. They are all looked after well, though I was informed that before the Fr. Godfrey Kisembo came they were not in a good state.

The Challenges met at the parish were

In the three places visited the pigs were being fed on maize and water as their major food because the food is very expensive and scarce.

Overall Challenges of the Project

In conclusion, it’s a great project but only requires commitment and follow up to ensure success.

Father Godfrey took some photographs and will have them shared with you. 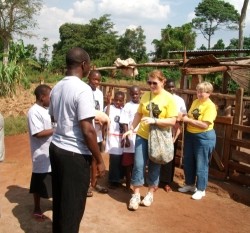 There was great joy January 14, 2011 when a group of visitors from Immaculate Conception Parish in Richmond, MO and some of their friends visited the foundation piggery project at St. John the Baptist Parish in Bulindi, Hoima Catholic Diocese and helped distribute piglets to at least 6 pre-screened orphans.

The names of the visitors were Jim and Jean Schmidt, Robert Bond, Patricia Bond, Albert and Doris Taber and Rachelle Williams. They were accompanied by Fr. George Ssebadduka, founder and President of Be a Christ to the Poor Foundation. 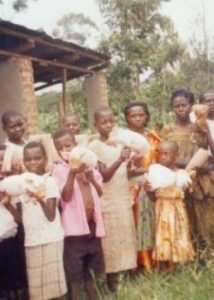 I greet you most cordially in the name of our Lord Jesus Christ during this month of the Rosary. I thank you very much for giving hope to these orphans and being Christ to the poor.

SITUATION OF THE PROJECT

I can confidently say that the project is doing very well. The method we are using is of breeding and multiplying piglets at our Demonstration site and distributing them to the Orphans and disadvantaged children.

Their parents / guardians or relatives are sensitized about the goals and objectives of this project. They are also equipped with skills of looking after piglets.

Both the children and their guardians are given the knowledge of looking after piglets, but the project is aimed at benefiting the children directly. We do regular monitoring of these projects in the homes of the children.

At the moment 138 children have benefited from the project.

At the demonstration site, the Banana plantation is doing well. We also teach these children to apply the wastes from Piggery to the crops, i.e., Organic farming. This is very good and it saves us from the many disadvantages of artificial chemicals.

CONCRETE BENEFITS OF THE INDIVIDUAL CHILDREN

Already some children have realized fruits of the project. Their pigs have grown and produced 6-10 piglets each.

When I visited them, I had deep interest in finding out how they used or planed to use the money. I was very happy to note that, they had given priority to acquisition of, school uniform, scholastic materials (books, pens, mathematical sets) some had, for the first time bought shoes.

The children of late Masanyu and Bunihizi touched my heart when they exclaimed with joy that they have, for the first time, been able to acquire school uniform. They also were able to buy mattresses.

URGENT NEEDS FOR THE PROJECT

I thank you very much and wish you God’s blessings in all your plans and work.

More than two thirds of the country’s poor people are small farmers. They are scattered all over the country. They make up approximately 80% of the population. Although efforts have been made to reduce rural poverty, urban areas have experienced a significantly greater reduction in poverty than the countryside. In the past decade, poverty has declined by a rate of 30% in urban areas but of only 10% in rural areas. … END_OF_DOCUMENT_TOKEN_TO_BE_REPLACED